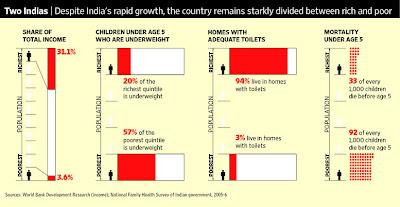 Geeta Anand with Diksha Sahni writes in a WSJournal coverstory about the Class Struggle: India's Experiment in Schooling Tests Rich and Poor spotlighting...

"...a grand Indian experiment to narrow the gulf between rich and poor that is widening as India's economy expands. The Right to Education Act, passed in 2009, mandates that private schools set aside 25% of admissions for low-income, underprivileged and disabled students. [...] the most notable results so far are frustration and disappointment as the separations that define Indian society -- between rich and poor, employer and servant, English-speaker and Hindi-speaker -- are upended. This has led even some supporters of the experiment to conclude that the chasm between the top and bottom of Indian society is too great to overcome. [...] India has tried to create opportunities for its poorest, who are often among the lowest castes. Quota systems reserve government jobs for the poor, and at some colleges almost half the seats are set aside for minorities. Affirmative-action policies like these have fueled resentment among some who feel quotas make it unfairly difficult for their own children to get ahead."

There's many more details in the article worth reading, but I especially like the story of young Vipin, the son of a school principal's former floor-mopper, which illustrates the potential of India's experiment -- and the talent which exists everywhere! 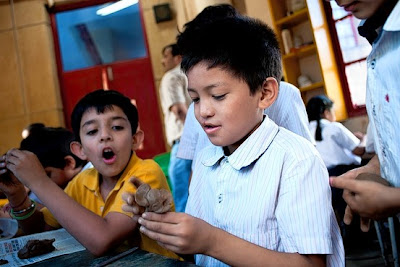