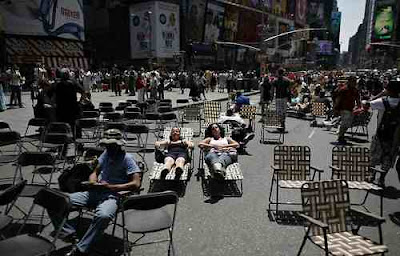 "Across Europe, Irking Drivers Is Urban Policy" writes NYTimes columnist Elisabeth Rosenthal. She probably didn't write the headline, but it really should have read "Across Europe, Valuing Pedestrians is Urban Policy" Why assert the negative, why pander to aggressively wrong car-lovers? Consider these items: Auto owners suck disproportionate subsidies from the taxpayer tit, plus cars themselves have inherently far greater geo-physical impact per user, have countless uninternalized externalities, are an ugly aesthetic blight, have multiple environmental minuses ranging from noise pollution to noxious emissions, and their indiscriminate misuse is the single biggest source of easily avoidable deaths and dismemberments planetwide. In contrast to America's broad baseline urban policy of oppressing pedestrians, Rosenthal writes that European cities are...

"...creating environments openly hostile to cars. The methods vary, but the mission is clear -- to make car use expensive and just plain miserable enough to tilt drivers toward more environmentally friendly modes of transportation. Cities including Vienna to Munich and Copenhagen have closed vast swaths of streets to car traffic. Barcelona and Paris have had car lanes eroded by popular bike-sharing programs. Drivers in London and Stockholm pay hefty congestion charges just for entering the heart of the city. [...] Many American cities are likewise in “nonattainment” of their Clean Air Act requirements, but that fact “is just accepted here” [...] It often takes extreme measures to get people out of their cars, and providing good public transportation is a crucial first step. One novel strategy in Europe is intentionally making it harder and more costly to park. “Parking is everywhere in the United States, but it’s disappearing from the urban space in Europe,” [...] While many building codes in Europe cap the number of parking spaces in new buildings to discourage car ownership, American codes conversely tend to stipulate a minimum number. [...] While Mayor Michael R. Bloomberg has generated controversy in New York by “pedestrianizing” a few areas like Times Square, many European cities have already closed vast areas to car traffic. [Says a Zurich official] “When I’m in other cities, I feel like I’m always waiting to cross a street. I can’t get used to the idea that I am worth less than a car.”

Indeed! Be sure to also check out related slideshow featuring some best-of Europe solutions.
Posted by Joost Bonsen at 21:20